Sometime between August 2016 and February 2018, YD drew the first character design of Pixraze: short brown hair, light-tan skin, red t-shirt, blue pants (probably jeans), grey shoes. Overtime the name “Pixraze” was forgotten so YD made a new name for the character: “Vex”. Vex’s character design changed when YD met Nikolay, because Nikolay’s character, Zheka, had a hoodie on. YD mistook the hood for a helmet, so he gave Vex a red helmet to match Zheka. Now the helmet is a core part of Vex’s character design.

Sometime in 2019 and 2020, YD remembered about Pixraze, and decided to make Pixraze and Vex separate characters, although this made some confusion as they had the same clothes, except for the helmet. However, sometime in early-mid 2021, YD changed Vex’s character design again: V symbol on the helmet, long-sleeved shirt, VX symbol on the shirt, white gloves, longer hair, and a scarf sometimes. This made Vex and Pixraze being separate characters slightly less confusing.

In late August of 2021, YD was inspired by Alan Becker’s newest Animation VS. Minecraft Shorts episode to start creating more, and on September 1st, he released a test animated stickman video on YouTube; before that, he had only published animations onto Scratch. He gradually got better and better at animation, and eventually decided to start his own series. It was expected to only reach 10 views total, but ended up hitting 11 (WOW!!!).

Vex finds someone named Zex who is suspiciously similar to him. Everyone who Zex meets loves him. They have multiple battles that include many things, but Zex just copies what Vex does (with varying success). Vex proves that Zex is just a ripoff and everyone leaves him. Vex’s friends see that Zex is sad, and encourage him to be himself and not a copy of someone else for public attention.

Vex finds a car with no door and wonders how anyone would drive it. He secretly follows it to a strange city. In this city everything is illogical, many things like cars and buildings and containers have no openings. There are random texts in the newspapers and on billboards like “Histime beteased a tews tost animmagnn” or “Ŋgũıỻe moj des scaoppı̃˞ŋþ ⸨20x⸩”. Skyscrapers tower miles high, safety concerns apparently ignored by the builders. Vex notes this and other stuff then finds even weirder stuff like a huge hole in the ground and decides to leave to get his friends to help him investigate.

Vex with helmet and also other armour on 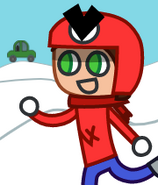 Screenshot of the animation demo of the Snowday episode where Vex is running through the snow. Car in the background with no door foreshadows future episodes.
Community content is available under CC-BY-SA unless otherwise noted.
Advertisement